The Fall and Rise of Cwmcroiddur Wood

The Fall and Rise of Cwmcroiddur Wood

(images at the end of the article ©Andy Brice and must not be reproduced without permission.)

Last winter, one of Cilycwm’s landmarks disappeared. The distinctively shaped forestry plantation on the hill opposite Cwmcroiddur, shaped like a give-way sign, (or a pair of Y-Fronts as one person described it), slowly vanished as the trees, a mixture of Japanese Larch and Norway Spruce were felled.

Cwmcroiddur Wood was planted by the Forestry Commission in the mid 1950s as one of a number of forestry blocks in the area, to provide a strategic reserve of timber, mainly for pit-props, Britain having almost run out of them during the Second World War. In the rush to get planting underway, little thought seemed to have been given to access for harvesting the timber, as we realised during the felling of the trees and the transportation of the resulting logs during one of the wettest winters in memory.

The irony is that, when we bought Cwmcroiddur in 2006, we had no thought of felling the trees. A piece of woodland was a nice place for a walk, for visitors on the courses we intended to run at Cwmcroiddur and the guests in the holiday lets who would use the buildings during the school holidays. Over a period of over five years, Mike Sidaway from Rhandirmwyn, worked his way round the plantation, carefully thinning what had been a very neglected block of trees, opening it up so that birds would start to use it, and plants would grow, at least at the fringes of the plantation. Mike made paths and we put up oak signposts to provide a very nice circular woodland walk. The woodland was coming alive again.

All was well until in 2010, we started to hear about Phytophthora Ramorum, a disease that had come to Britain, initially in Rhododendrons, but subsequently jumping species to infect Japanese Larch. Initially it was in south west England, but then it appeared in south Wales and began heading in our direction. The Forestry Commission began to issue Plant Health Notices with severe legal requirements for any woodland that had even one infected tree. At that time, this meant that every tree within 100 metres of an infected tree had to be felled. Wood could be removed from site, but only under strict bio-security conditions, and taken only to nominated sawmills. A nightmare scenario!

Back in June 2013, we found out that Phytophthora Ramorum was advancing on Cwmcroiddur, although our trees were still healthy. When infection was found in Caio Forest (about a mile or so as the crow flies, we decided that we couldn’t just keep our fingers crossed any longer. We contacted Natural Resources Wales (which had replaced Forestry Commission Wales by then) and asked for advice.

It was suggested that it would be best to fell the trees and extract the timber. The one positive thing about Phythophthora Ramorum is that, once a tree has been felled, the threat from the disease ends. This means that, by acting quickly, we could avoid having the disease at Cwmcroiddur. At least, being uninfected, our Larch was still saleable. Also, because we had Norway Spruce, we were told that this would subsidise the cost of getting the timber out from what is a steep site with poor access. We realised that we had to make a tough decision. We applied for a felling licence, it came through quickly, and the felling contractors started work in late September 2013.

The whole process was made possible by the Theophilus family of Rhiw Mallaen by allowing us to use their fields for the access route from the woodland. In total, 3800 tonnes of logs were brought from the wood, representing about 400 journeys by the forwarder vehicle to the loading area and about 150 loads by 44 tonne articulated lorry from the loading area out to the sawmill at Newbridge on Wye or power station at Port Talbot (some of the wood was burnt to generate electricity).

The experience of the harvesting is not one that I would recommend! It was immensely stressful (partly due to the terrible weather during the harvesting of the trees). The income from all that timber was tiny – barely covering the cost of the harvesting, so it was with trepidation that we have moved on to the more positive task of getting Cwmcroiddur Wood back on the map and away from looking, without its trees, like a World War One battlefield.

We applied for Glastir 2015 woodland management grants and were accepted for these, mainly because Mynydd Mallaen is a ‘PAWS’ site – Previously Ancient Woodland Site. Preparation of the hillside opposite Cwmcroiddur for the planting has been carried out. This involved spraying bracken and clearing brash (tree branches and debris). This has been done by ourselves, by friends from Cilycwm and by contractors. The woodland area, last completely enclosed by fence in the 1950s, now has a new fence right round it and around 19000 baby trees are on track to be planted in mid February 2015.

The big difference is that the future of Cwmcroiddur Wood will be as a broad-leaved woodland, with a mix of tree species similar to that which it might have had hundreds of years ago. It will take many years for the woodland to mature, and we hope that it will look much more natural than it did before – so no ‘give-way sign or Y-Fronts’ this time! 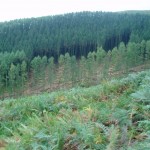 Early in the felling 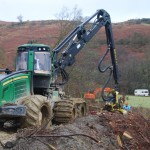 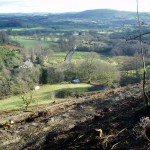 Near the end of the felling 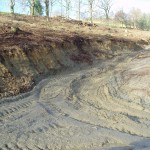 Results of the rain 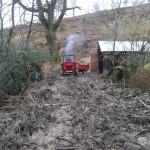 The track from the woods 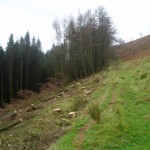 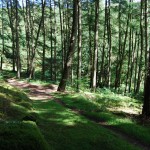 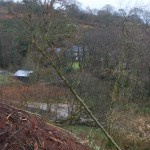